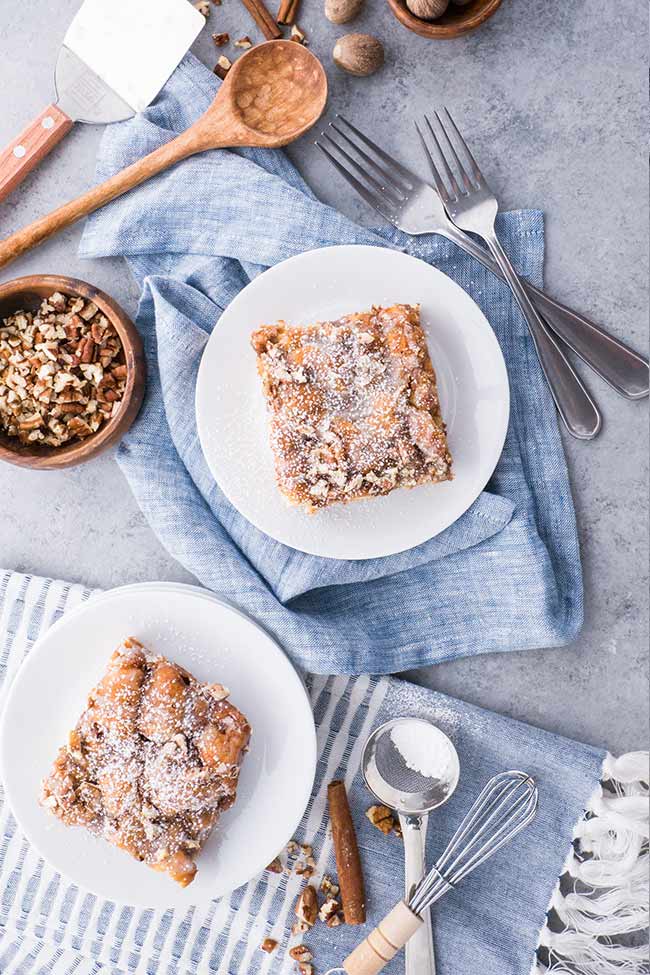 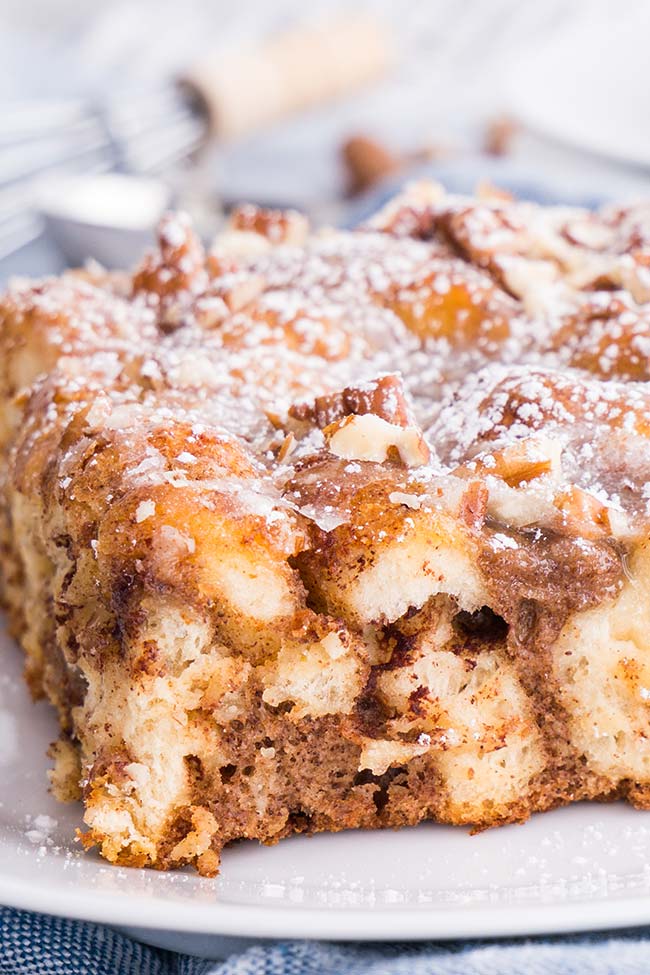 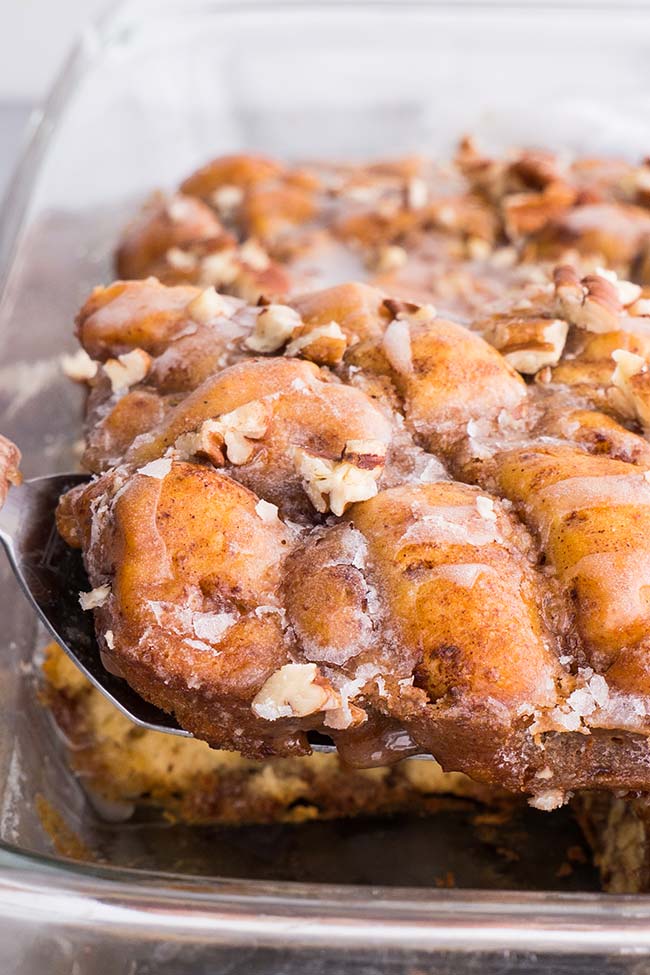 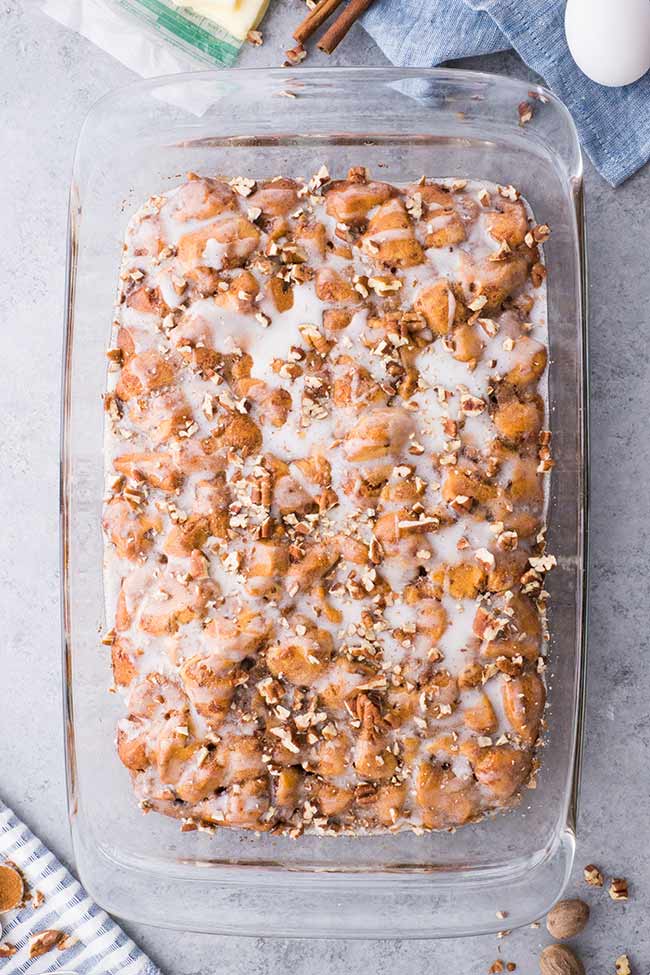 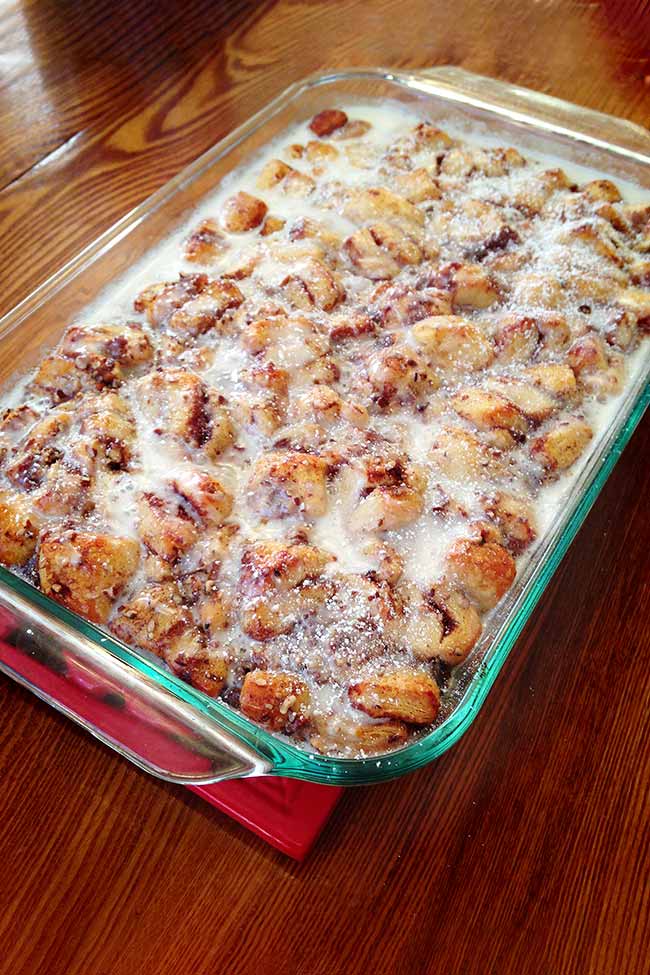 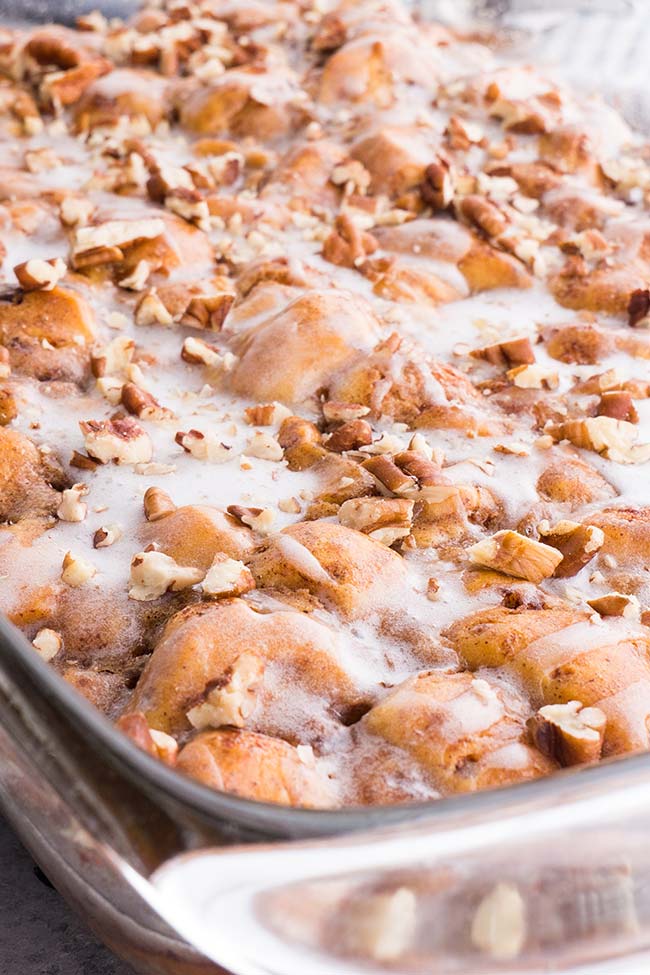 This cinnamon roll casserole made with Pillsbury cinnamon rolls, is essentially baked cinnamon French toast but gooey and absolutely delicious!

A family-friendly recipe that serves a small crowd.

Think lazy weekend mornings or for serving overnight guests without a lot of fuss. This french toast bake is east and kid-friendly. It can even be made the night before then just popped in the oven to bake in the morning so it’s a great choice if you’re wondering what to make for Christmas morning breakfast.

The secret is starting with Pillsbury cinnamon rolls. I like using the flaky Pillsbury Grand rolls but any kind works, cook time will vary so best to keep an eye on these while they bake.

Watch how to make this recipe.

You’ll see how to make this cinnamon roll casserole, step by step. It’s quick and easy.

I actually discovered this recipe via a good friend who made this for us during a visit to her house years ago. It’s a variation of Pillsbury’s Cinnamon French Toast Bake recipe using canned Pillsbury Cinnamon Rolls. I was hooked after the first bite and was on a mission from there to make it myself and of course, add my own little touches.

Per my friend’s recommendation, I also left off the maple syrup because it’s plenty sweet enough without it. In my opinion. If you want to go all out and add it back, by all means, do it. If you just want a little hint of maple flavor, you could add a splash into the egg batter.

Ingredients Needed to Make this Recipe

Here’s everything you need: Pillsbury cinnamon rolls (or your favorite brand of cinnamon roll raw dough or use homemade dough if you’re feeling ambitious!), pecans, eggs, flour, milk or half and half, butter, vanilla, cinnamon and nutmeg (optional). 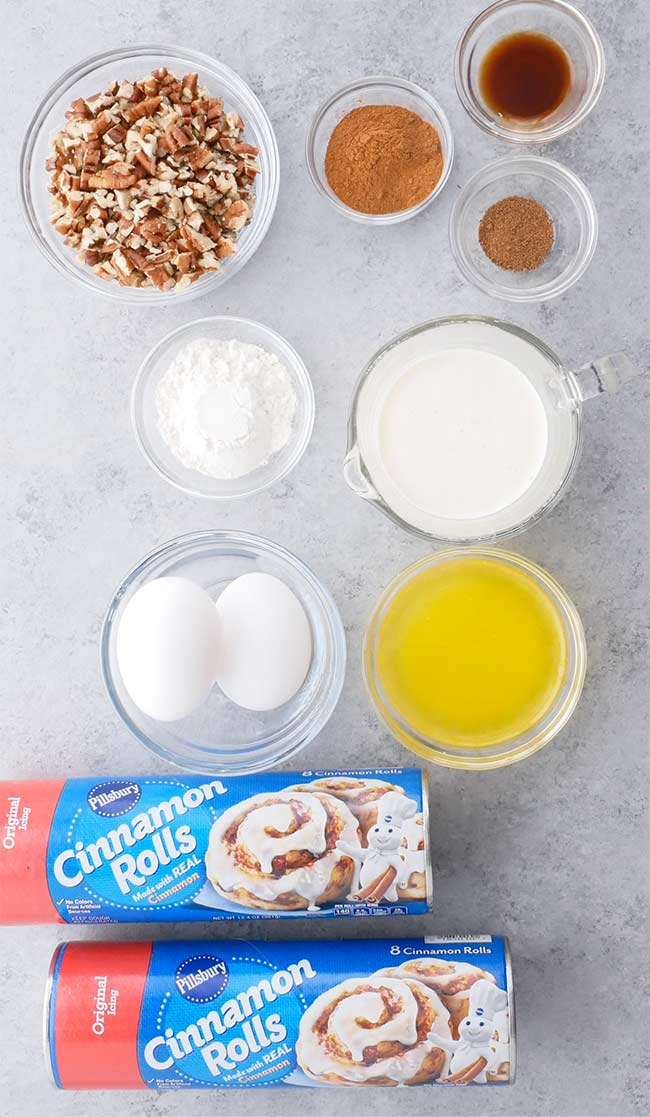 Adaptations to this Cinnamon Roll Casserole

The pecans taste so good roasted on top of this breakfast casserole, however if you have picky eater who don’t like nuts, you can leave them off. Or, cover just half the casserole with nut and leave the other half, nut-free.

Of course, I’m always open to improving so please let me know what you think and if you changed anything to make it even better. All feedback welcome! You can review the recipe below and/or leave a comment.

Cooking Tips for Success on the First Try!

If you love this cinnamon roll casserole, try it in a slightly different form. One day I decided to make this same recipe but as more of pull apart bread loaf. It’s really excellent and comes out looking so pretty too! If you want to try that, here’s the recipe: Cinnamon Pull Apart Bread.

Browse these popular recipes here (be sure to Pin the ones you like for later!)

This easy cinnamon roll casserole recipe using Pillsbury cinnamon rolls was featured on Made by You Monday, Inspire Me Monday, South Your Mouth, Wow Me Wednesday and Menu Plan Monday and Meal Pan Monday! 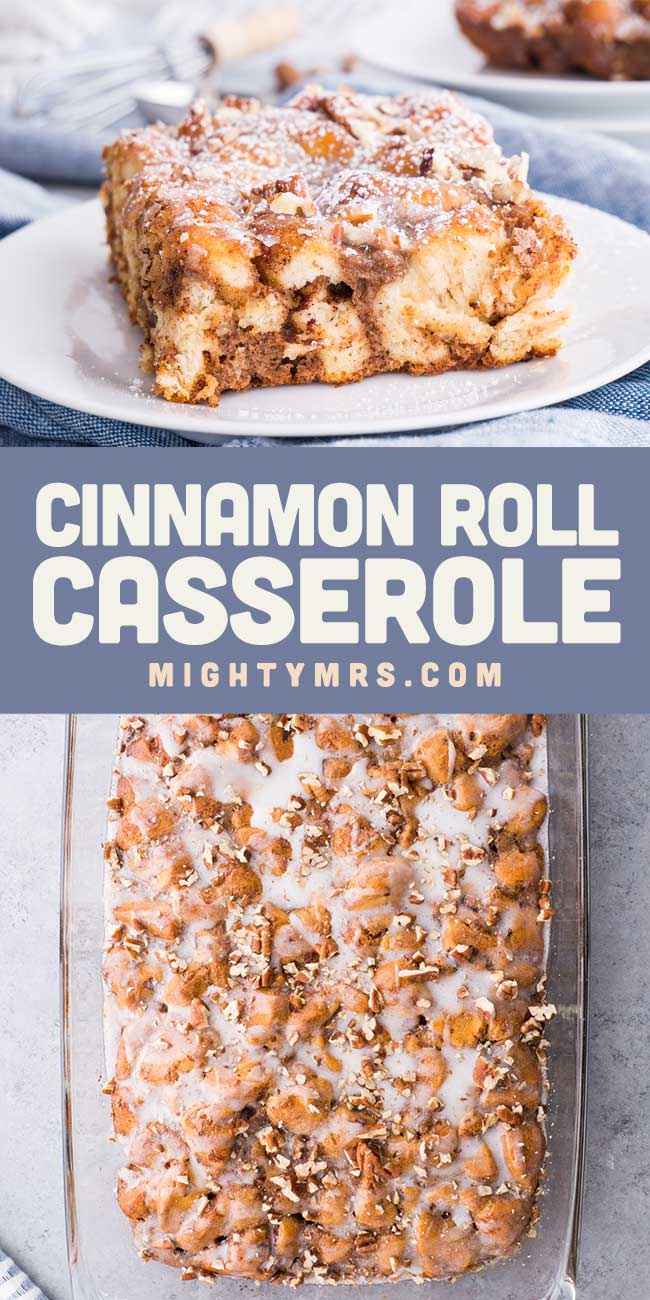 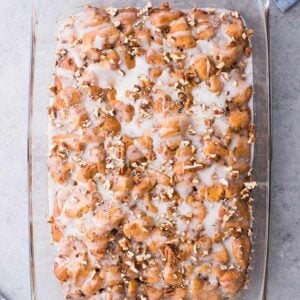 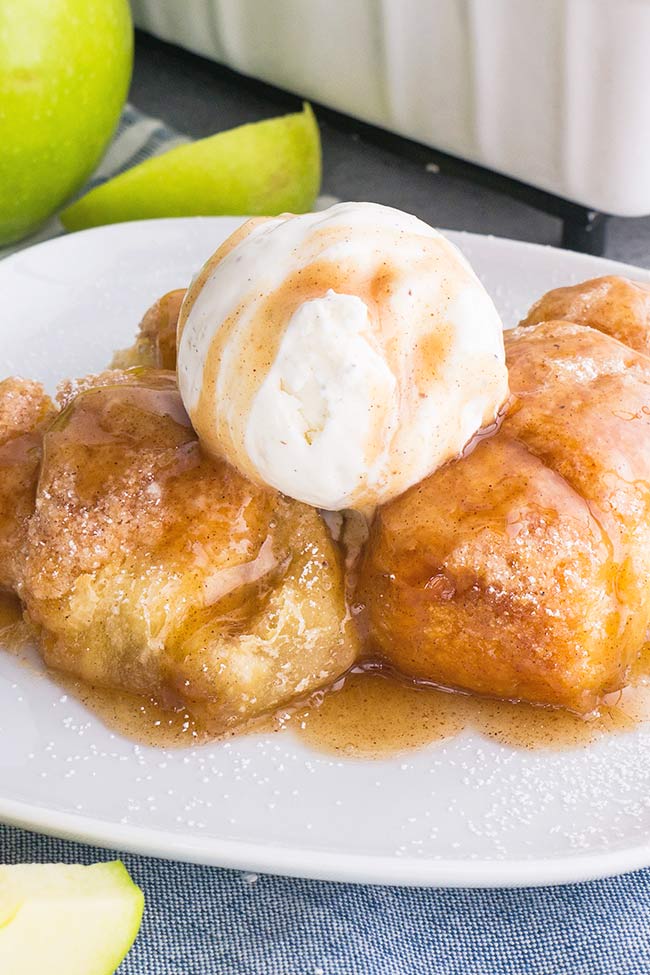 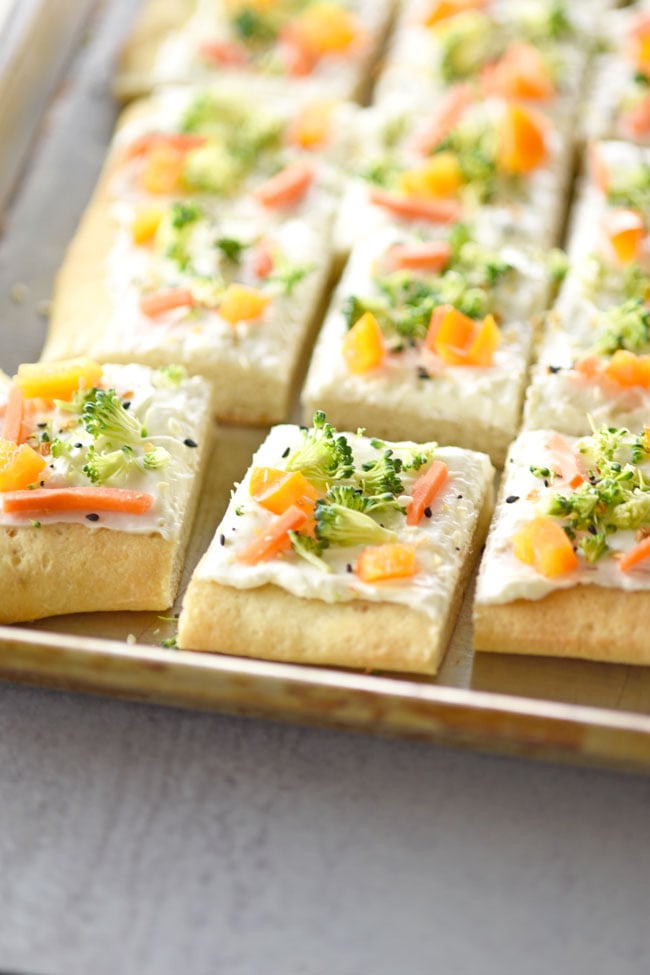 Delicious! Perfect for a New Year's brunch! Omitted nutmeg. Was baking a pie at same time so oven temp was 400 for 24 minutes, perfect!

Thanks for the tip about baking at 400! So glad that worked out and that you enjoyed the recipe. :) Happy new year!

My grocery never has nutmeg in stock. Could I use allspice in place of nutmeg?

Hi Ashley, good question. I would just skip the nutmeg. It’s not not a key ingredient so this dish still tastes great without it. It really just adds a bit of earthy, nutty flavor which you can get from using actual nuts too. You could try allspice but it would give this dish more of a fall, pumpkin pie-like flavor. Hope this helps!

Oh my goodness this looks sooooo good! It was nice to meet you!

Thank you! Same to you, Nancy! I love your site. Can't wait to explore it more and check out all your lovely travel photos, recipes and crafts. The painted cactus glasses are so cool!

My kids love this so much! I also mix some brown sugar and cinnamon and cover the top of it and then bake for some crunch. I add the icing on top of that:)

Glad you loved this. Great idea to add some brown sugar. YUM!

I'm Angela, a busy mom/business owner who formerly stressed about dinner every night. I learned to cook healthier homemade meals one recipe at a time and now actually look forward to cooking dinner, bringing a side dish, or making a treat to celebrate special occasions. Here you'll find all my favorite recipes along with some tools to help you get organized, save money, and be more creative and relaxed so you can have more fun cooking too! Be sure to check out my shop, a small collection of my favorite Amazon finds while you're here. 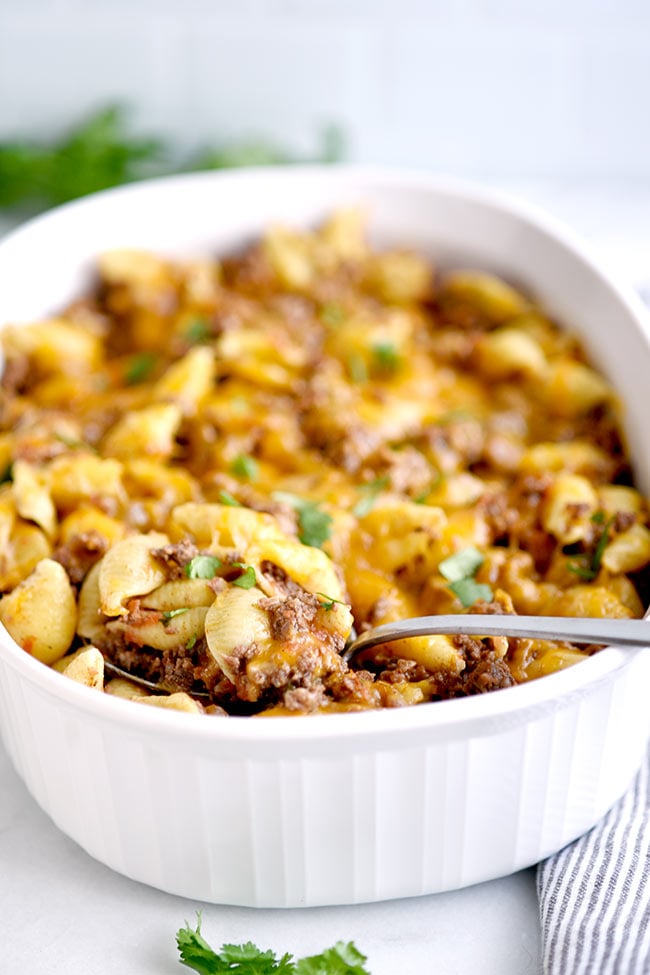 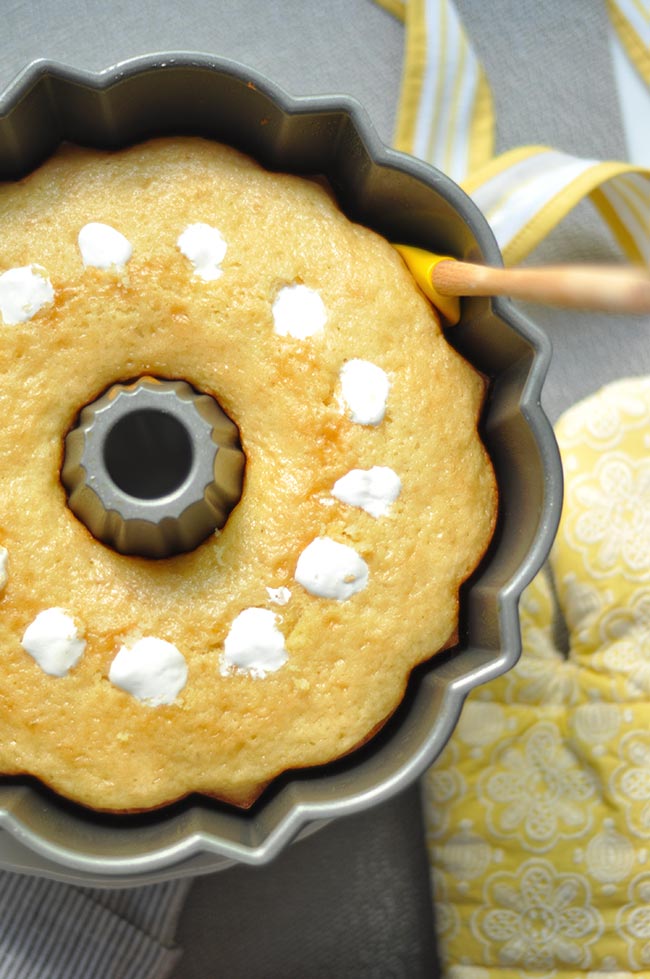 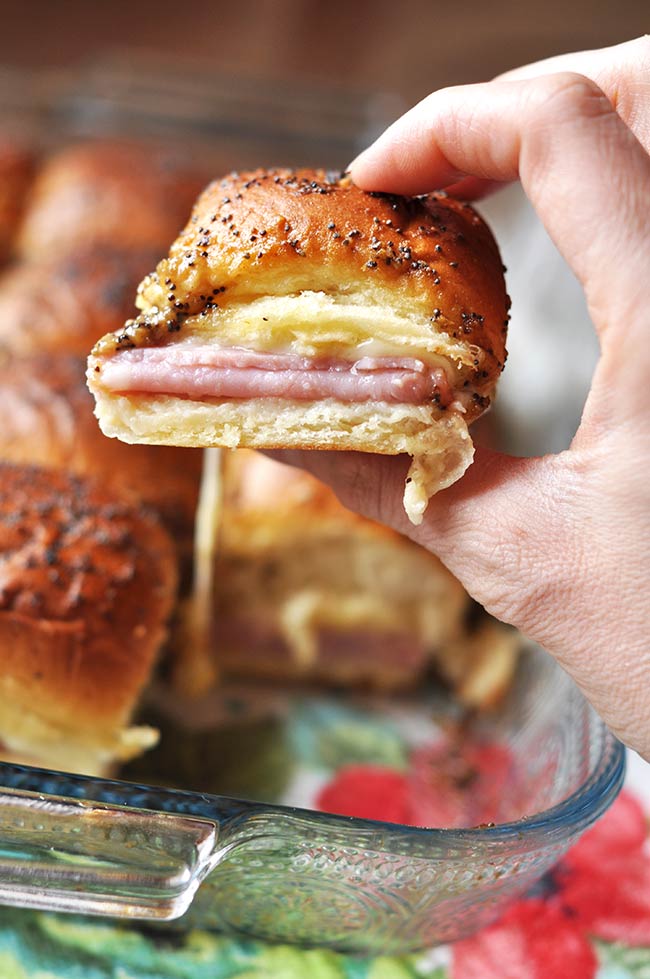