A garden is such a beautiful thing! I love so many things about them. From watching a tiny seed grow into the freshest produce you’ll ever get your hands on, to the sharing of the harvest among friends and family. I’m lucky to have friends and family who share their harvest with me. I have just enough room for a few herbs, one tomato plant and an attempt at a potted pumpkin plant. We’ll see how that goes… lemme just say I’m real glad October is a ways off still.

One of the most fun things for me about gardening, as you can imagine, is figuring out what to do with the random varieties of veggies that come my way. Specifically the peppers. There are SO many kinds of peppers! In fact, I’d never even heard of Giant Marconi peppers until just this year.

After a bit of research and taste-testing I learned that they are typically peppers you stuff and they are deemed a sweet pepper. To me, they don’t really taste sweet though, they do have a very mild flavor like an earthier bell pepper and they are a little bit bitter.

This recipe is easy! Even if you’re never stuffed peppers before.

This recipe is super simple and tasty is a great go-to if you have these giant guys growing in your garden this year and aren’t sure what to do with them or are looking to try something different. 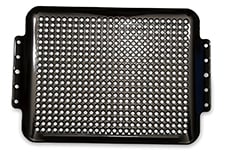